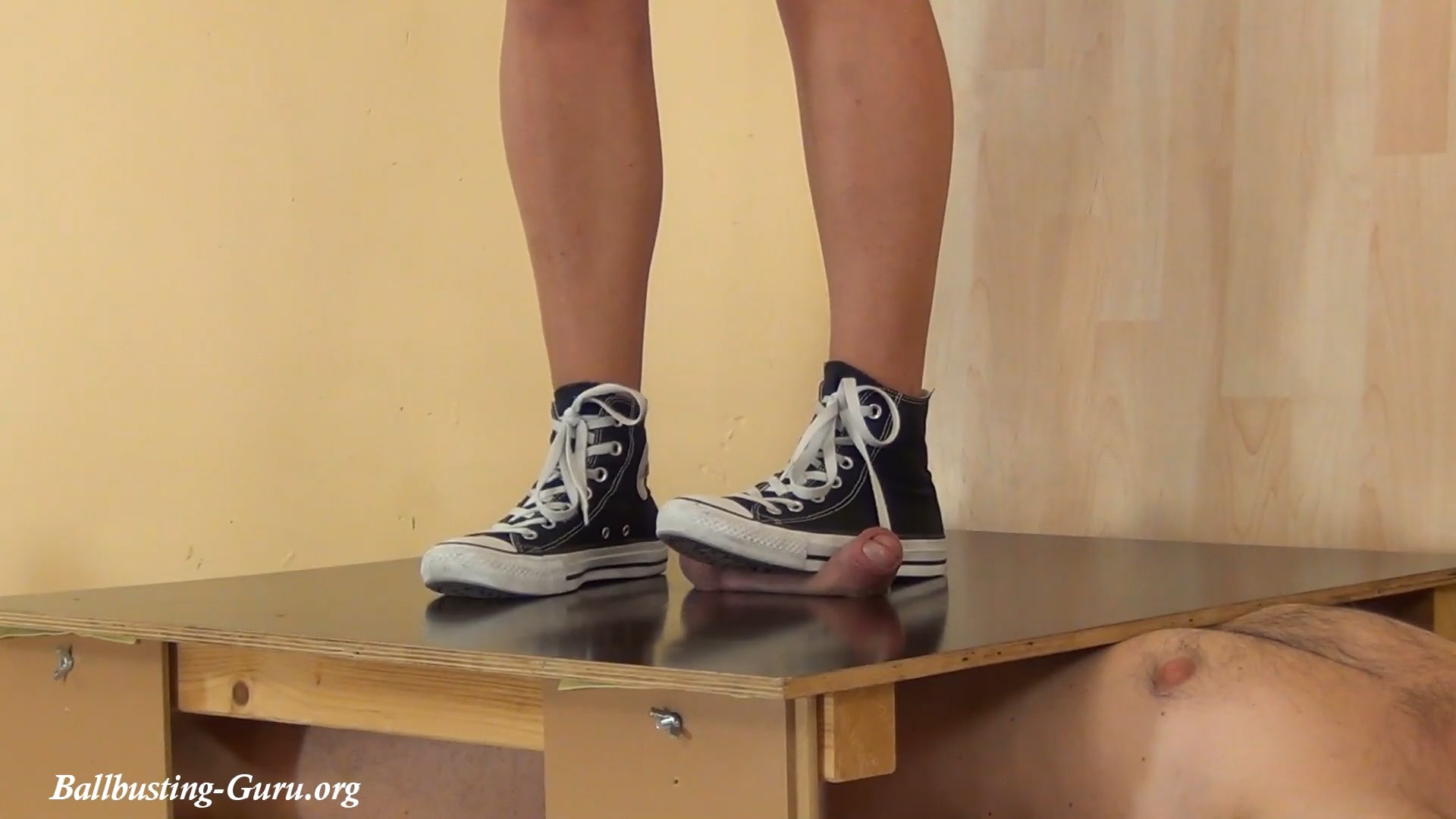 Mistress Lara in dungarees, white bra and Converse Chucks. The same ones that she wore in “Lara in Converse Chucks, Timberlands Nellie Pullon and Nike Air Max vs. Guest Slave’s Cock and Balls” but in the meantime she has worn them a lot and now they are really well used.
The Goddess steps on the board and says to her slave: “Today I will squish your cock.” And then she steps on his dick with all of her weight, leaving a soleprint in his meat. As if it was just a stick, lying on the floor she walks over his manhood, ignoring his groaning with pain. Then she places her foot on his balls and says: “And maybe your balls too.” and presses them until it really hurts.
Slave’s cock has grown and Lara gives him a wonderful shoejob while she poses into the camera, but then she shows her sadistic side again. Lengthwise with one shoe and with her heels on his scrotum she steps on his crotch – with all of her 139 lbs / 61 kg she squeezes his genitals until the slave groans aloud.
Lara stomps and rubs his cock under her soles and then she turns around and presses the front part of her shoe firmly on his nuts. She must laugh as the slave screams with pain.
Kicking, stomping, marching on cock and balls, lots of full weight walking over them, sometimes without looking down – everything totally regardless. Lara has fun, she laughs about his pain, she talks and, as if she was in a photo shooting, she poses into the camera while she is standing on his vulnerable parts.
Several times more she steps on his cock and balls with all of her weight until you can see clearly the Converse soleprint in his meat and a deep mark from the edge of her heel in his ballsac.
And once she decides to take him to the climax. She faces the camera while she marches with her heels on his crotch. Left heel on his dick and right heel on his nuts. Slow, fast, with little pressure and with lots of pressure and at some point he cannot hold back any longer.
He jerks under the marching Goddess and Lara pumps out all of his cum under her heels.
Then she releases him, thrusts aside his cock and steps into the cum puddle. Now she tramples all of his cum on the board.
With her cum covered soles she walks away. 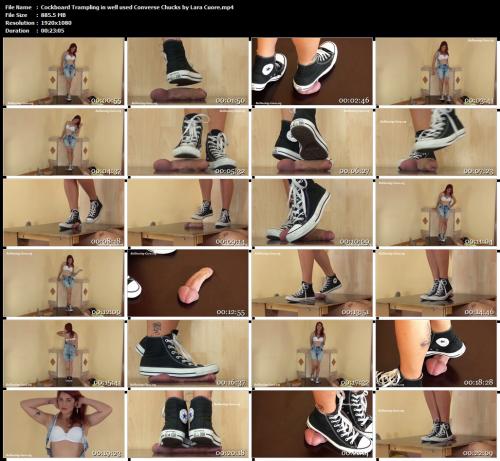 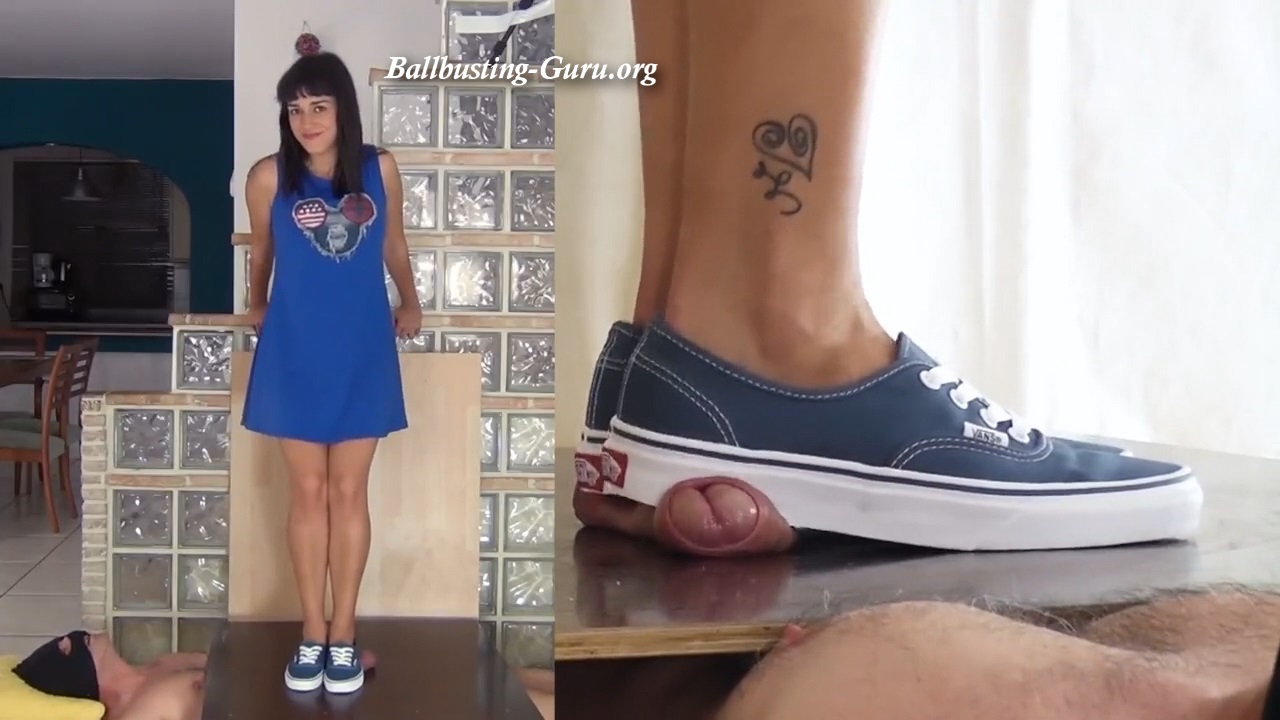 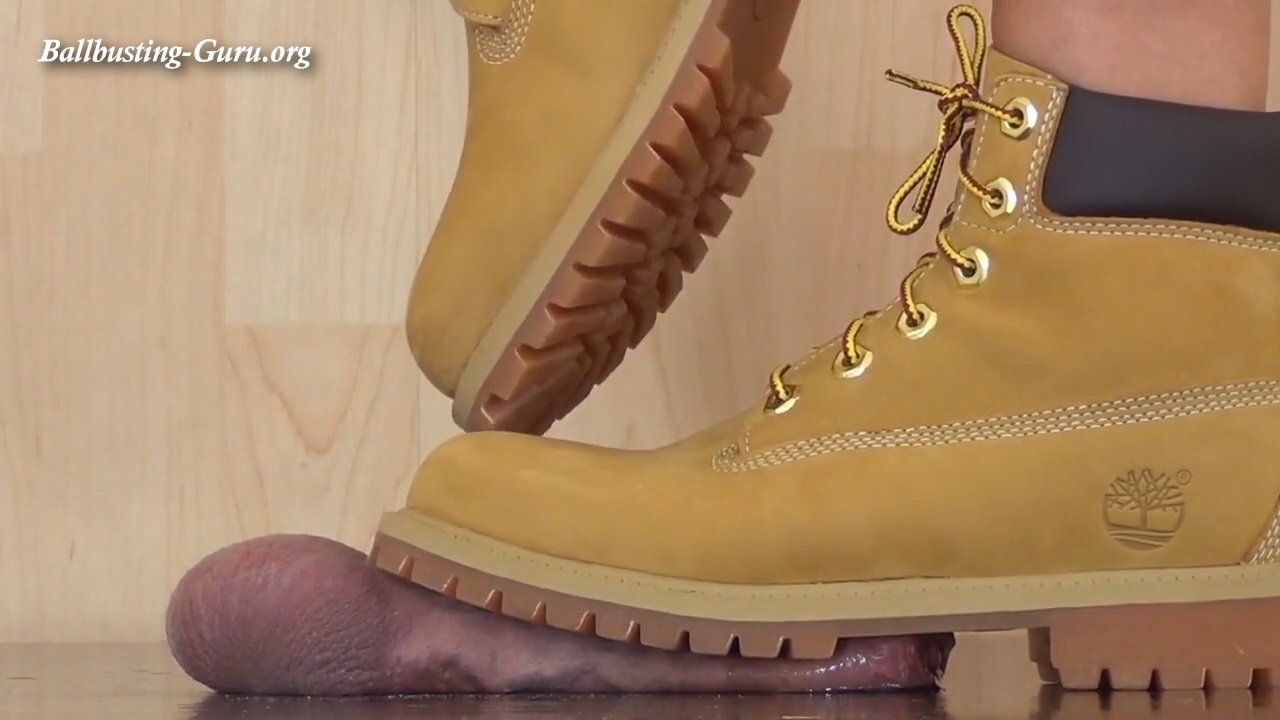 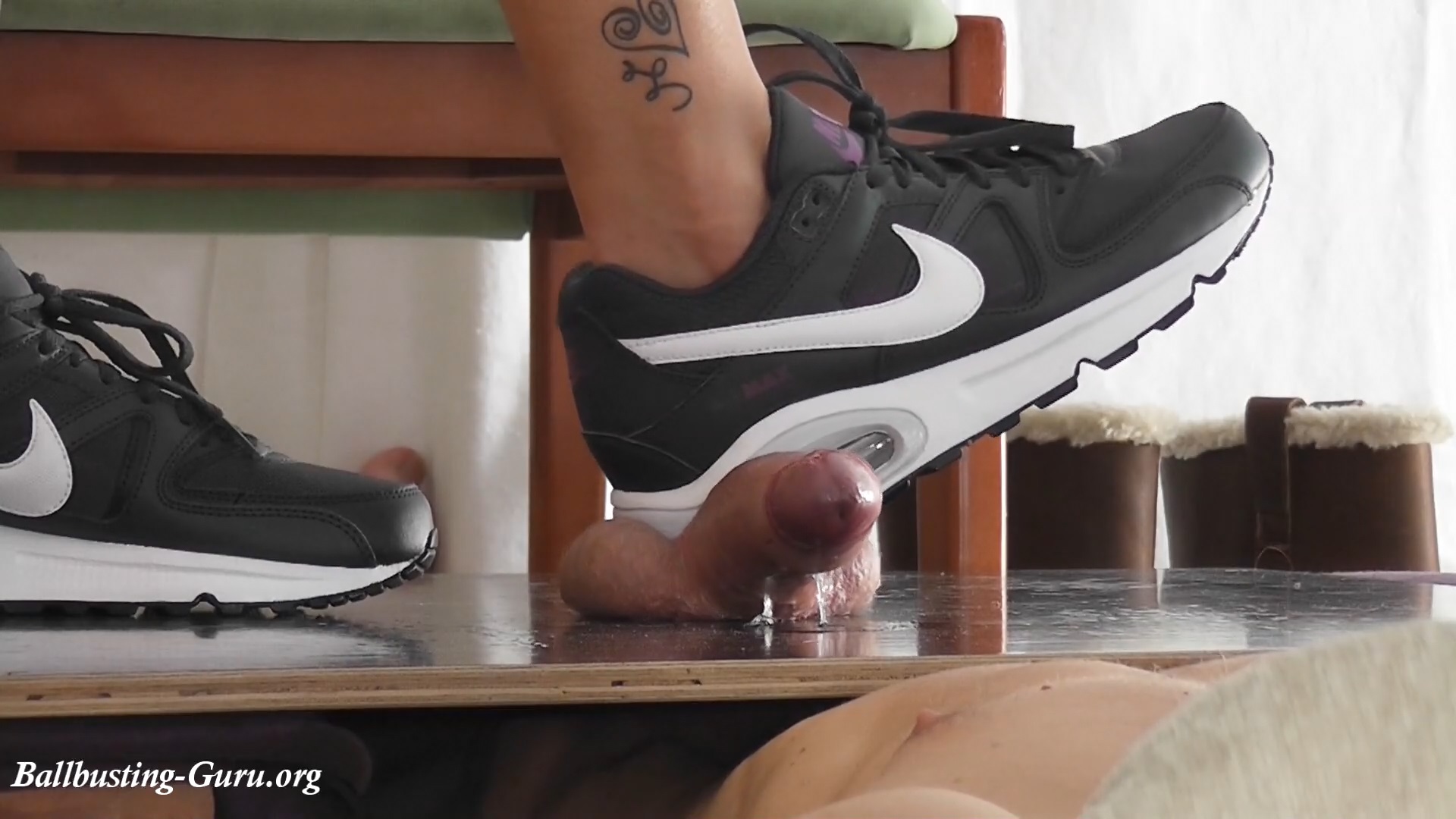 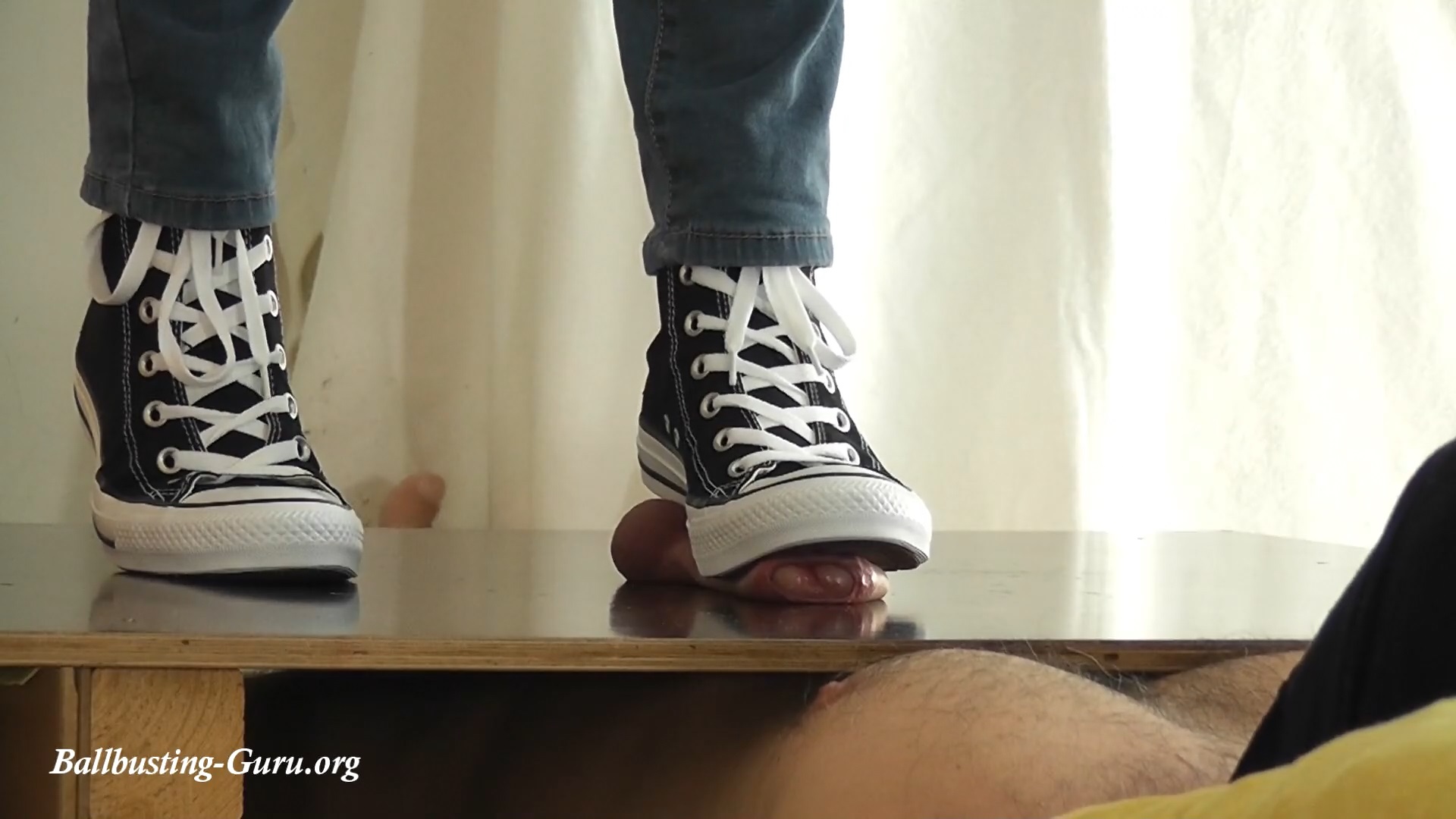 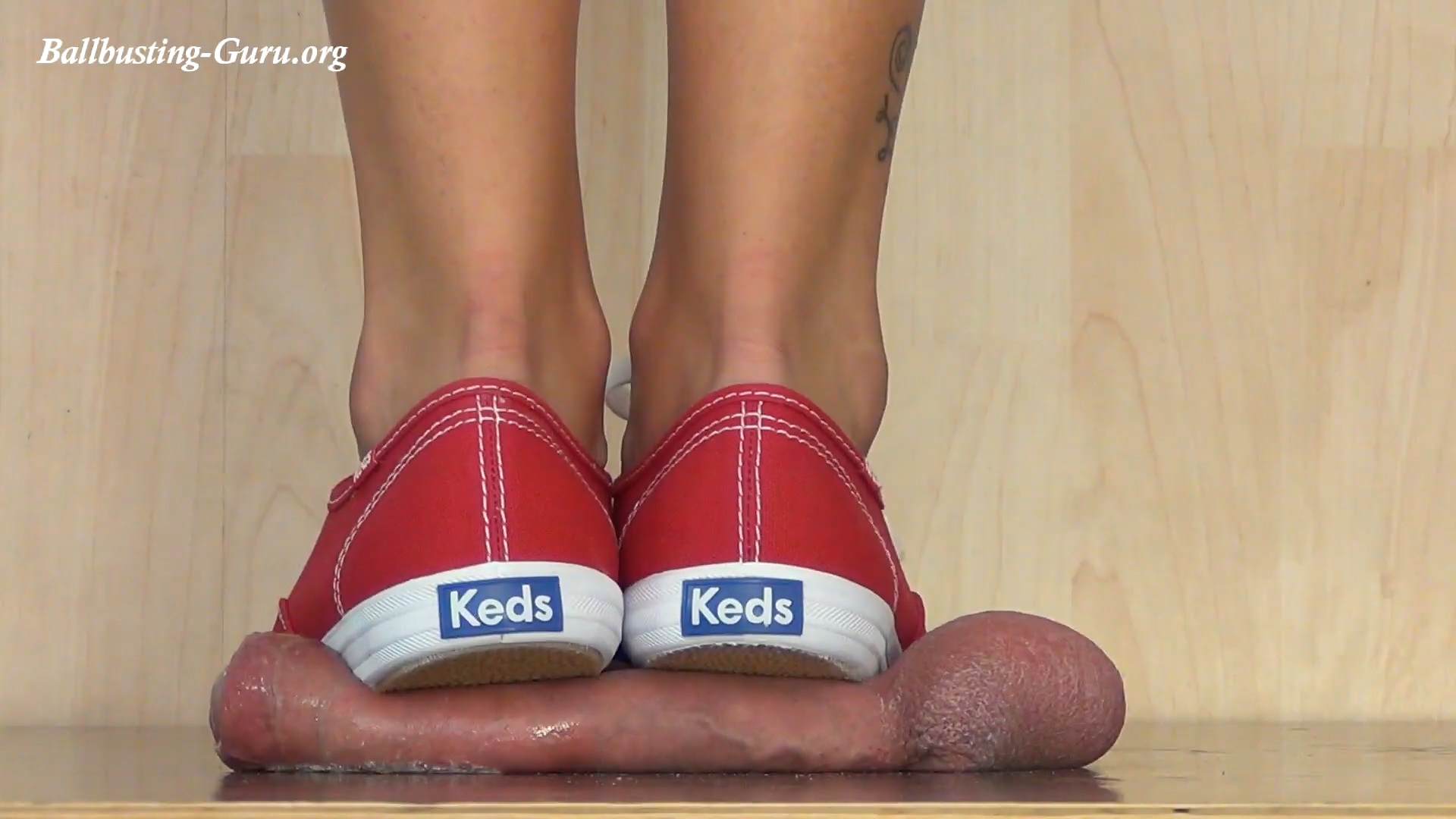