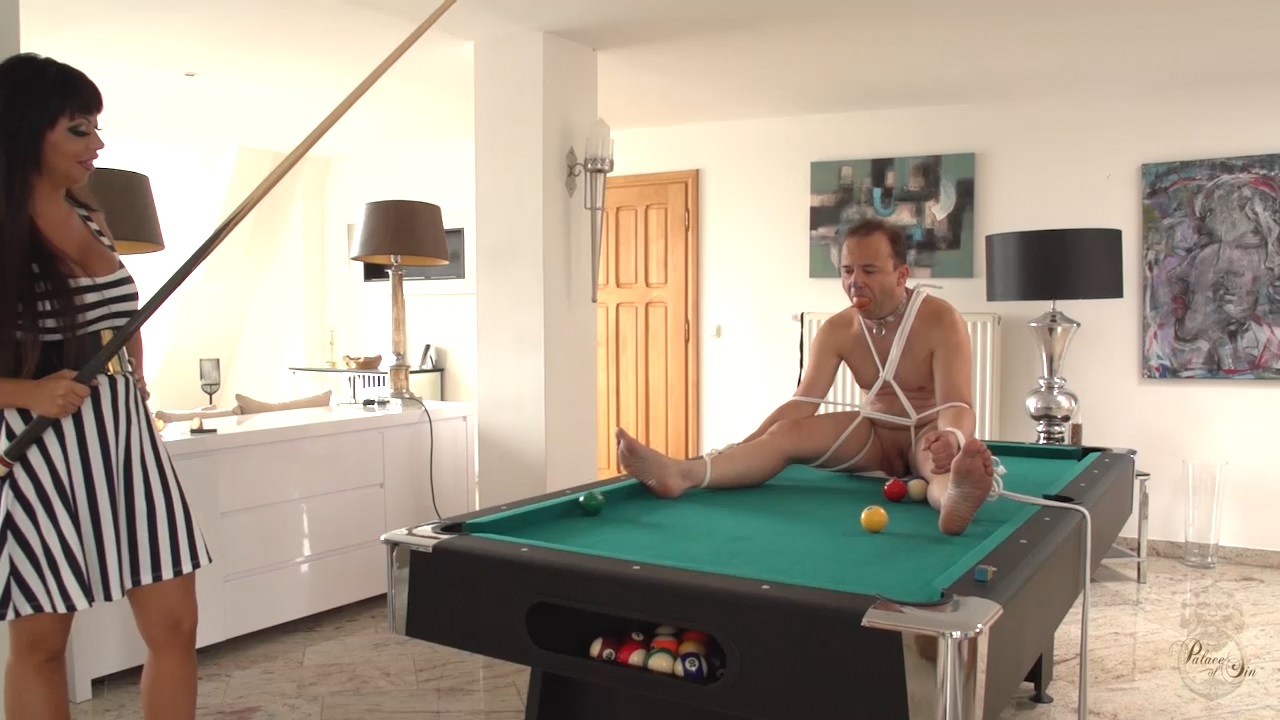 There’s trouble in River City. When a slave makes himself available under false pretences, it can end badly. This happened in MISTRESS KATE’S private quarters when SHE discovered that HER Tickle Slave was not the least bit ticklish. That left THE LADY’S plans in disarray, so is it any wonder that HER subordinate will have to suffer big time? It is clear that THE MISTRESS will choose something extremely disagreeable for him: CBT. How fitting that SHE had decided to use a pool table as HER tickle table. Billiard balls are massive, and they can develop quite a destructive force when they bulls eye in on flesh. Unfortunately for Mr. No-Tickles, FAST KATIE’S aim is sharp and true. Still, you have to admit SHE’S kind.in HER way. SHE leaves his balls unbound and even allows his cock to serve as a shock absorber. Be that as it may, the impact of the first ball on his unprotected scrotum is so intense that THE HUSTLERATRIX draws . Fortunately, the subsides, but pained cries echo so regularly through the room that it begins to get on MISTRESS THE MERCILESS’S nerves. To shut him up – or at least muffle him down – SHE stuffs a cut onion in his mouth.

The heavy billiards bear down without end on the slave’s balls. He may not want to do this on a daily basis, but it’s not really up to him, is it! THE IMPERIOUS MISTRESS forbids the fearful slave to flinch in anticipation of the impact of each nasty ball, so all he can do is hope the next collision will be less painful. For LADY KATE, it’s just a game. SHE volleys in shots from a bewildering variety of angles and promises to quit when each ball finds its pocket. Alas, FAST KATIE ain’t nearly a good enough shot for a trick like that, so SHE just has to keep practicing until it makes perfect. The torture knows no end until the billiard balls up and threaten to contaminate THE CLEANLY MISTRESS’S table. After forcing the slave to attend to various errands in spike shoes, HER BENIFICENCE decides to let him show his stuff with a blow job on a dildo attached to her thigh. SHE prefers well-executed deep throat, but the slave doesn’t have it in him to do the job right, so SWEET MISTRESS KATE has no alternative but to brutally drive the rigid dildo deep down his gulp. The subsequent embarrassing scene at the window is a no-brainer for him.

The slave is lovingly invited to sit on the big rubber dildo, which has been not so lovingly greased with Sambal oelek hot sauce. He suffers the double torture of burning his ass with rapid thrusts while literally standing on pins and needles in those intolerable spiked shoes. It gets worse when he misunderstands MISTRESS’S instructions and SHE forces him to canter round the flat in those selfsame shoes in search of a new condom. The amused LADY KATE shows zero compassion. With the new condom, THE RUTHLESS DOMINATRIX knee-fucks HER slave in front of an open window, while enjoying a smoke and a chat with FRÄULEIN SCHMITT. Once SHE’S got his butt limbered up, SHE puts the billiard balls to further excruciating use, ramming a couple of them up his bung hole till they all but disappear so that the slave begins to worry whether they will come out again. After clamping his balls in a humbler and attaching a cervical pillory, LADY KATE gives the slave a proper flogging and then allows him to enjoy one of his kinkiest orgasms ever, accompanied as it is by abdominal cramps. THE LADIES assume that the atypical sounds that escape him must be howls of unbridled joy. 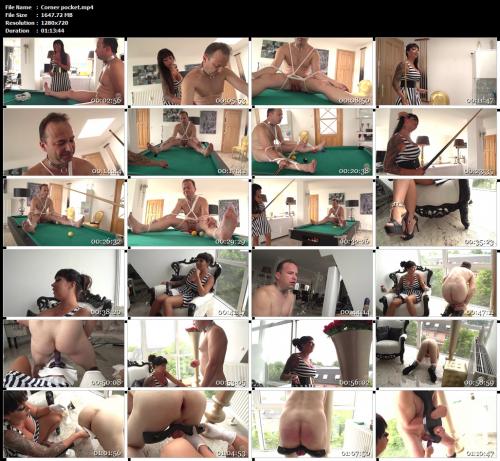