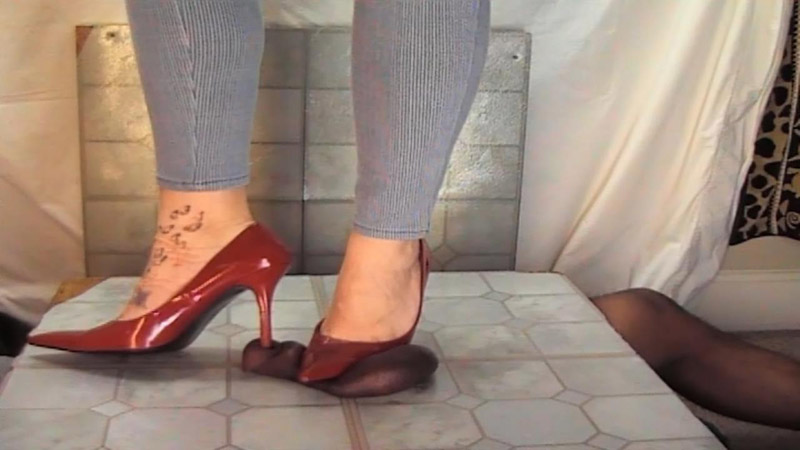 The Goddess wears her Red Pumps! Her pathetic slave has been really struggling and in serious jeopardy of losing his sex privileges! Perhaps she will give it another chance but first she decides to TRAMPLE his manhood! CRUSHING HIS COCK AND BALLS FLAT!!! She kicks his dick with the pointy toes of her shoes and even HEEL STOMPS THE HEAD!!! His limp penis is an obvious disappointment to her so She uses her sharp heels to kick and slash at his dickhead and she even becomes agitated when it starts to bl’ed!! Watch how she kicks and STOMPS THE SLAVES BALLS without a care!!..She then has It to put some lube on her thick sharp heels and then makes SEVERAL FORCEFUL ATTEMPTS TO JAM THEM INTO HIS PENIS HOLE while completely crushing his cock in the process!!! The poor slave screams in pain as she continues with her persistent vicious attempts to shove her heels inside his stubborn penis!..But the Goddess refuses to give in and so then orders the slave to grab and hold his own dick up while she continues this t0rture DAMAGING HIS PENIS OPENING with the sharp edges of her heels!!! The slaves incredible display of obedience is rewarded only with CRUEL VERBAL HUMILIATION as the Goddess taunts It about his most recent performance failure as she continues to render him useless as a man!!!